Denes Natural Pet Care was founded in 1951 by Buster Lloyd-Jones, who, during his career, was the most sought after vet in Britain and whose fame spread throughout the world. 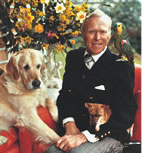 Buster was born in 1914 in Feltham and quickly developed a passion for animals. Confined to bed, recovering from polio, he spent many hours observing how closely they interacted with nature. He wrote later in his book The Animals Came In One by One – “Animals have an instinctive wisdom, a deeply ingrained understanding of nature, which man once had”. He had seen at first hand how sick animals would forage for plants to heal themselves. He recognised the healing power of herbs and wrote “I gradually began to understand how nature takes care of its own”.

Buster’s childhood dream was to become a veterinary practitioner. He trained in Woodford and Wimbledon and then worked from 1934 in Chelsea and Brighton. In 1939 the war forced him to return home to practise in Feltham. One thing had always interested Buster, in Come Into my World he wrote “The process of applying natural remedies to animals has absorbed me all my life” . During wartime when food and medicines were scarce he turned to natural feeding methods and employed homoeopathic and herbal remedies while continuing to develop his concept of natural feeding.

As Buster’s practice grew, so did his menagerie of pets and also his fame. After the war, for the sake of his health, he returned to Brighton, where his practice continued to flourish and began to attract the famous. Stars from stage and screen brought their pets to him, as did perhaps his most famous client, Sir Winston Churchill, Britain’s Prime Minister during the Second World War.

He opened his book Come Into My World “The weather matched my mood when I wrote that fateful letter. Although it was high summer-25 June 1965, I will never forget the date-it was a dark and forbidding afternoon” . Buster’s ailing body had let him down again and he wrote to the Royal Veterinary College asking for his name to be removed from the register of practising vets.

However, confined to his wheelchair, Buster took the opportunity to concentrate on writing and his first autobiography The Animals Came In One by One was published in 1966 and the second Come into My World in 1972.

Buster Lloyd-Jones died in 1980, but Denes continues his work by producing and extending his range of high quality foods, licensed veterinary herbal medicines, herbal supplements and aromatherapy products. This work is continued with the help of Tim Couzens, a veterinary surgeon who acts as veterinary adviser to Denes.

Tim first qualified as a vet in 1980. He has been practising homeopathy for the last fourteen years and has a special interest in the homeopathic treatment of horses. He is the principal of the Holistic Veterinary Medicine Centre, a referral practice specialising in complementary therapies for all species of animals. He writes regular articles for various magazines and is the author of a forthcoming book on homeopathy for horses. Tim uses homeopathy and herbal medicine, together with acupuncture, nutritional medicine, nutraceutical medicine and Bach Flower Remedies.